The restart text is your text conversation’s defibrillator. It’s a provocative text designed to revive text conversations that have gone stale – your last-ditch effort at re-sparking the girl’s interest and intrigue in you. Crafting the right one will give your conversations another fighting chance.

Here are the top 5 templates for creating restart texts for your inactive text conversations:

1. The Callout. Call the girl out for not responding to your last text. A short, blunt insult will make her feel guilty for her faux pas. She’ll feel bad for being inconsistent with her kinder self-identity and will try to change your mind to resolve her inner-turmoil. Girls will also be more attracted to you for being a man who isn’t afraid to call them out.

2. The All Caps Reiterator. Ask your unanswered question again, but in all caps. This text is a playful slap on the wrist for not responding. It’s an indirect way of calling her out for her bad behavior without being harsh.

You: “Ride it in the hills all the time. What u drive?”

4. The Wrong Number. Send a text that has no relation to the girl or any of your past interactions with her. She might respond to resolve her confusion about your text. Careful not to make the Wrong Number too elaborate or girls will know it’s contrived. And obviously her name is not in your list of ‘recent’ text conversations, so to make the wrong text plausible, write a message that sounds like it’s going to a recipient you rarely text.

5. The Cliff Hanger. Pique her curiosity by alluding that you know something that would interest her. More socially calibrated girls might realize this is a ploy to get her to re-engage. But even then, they might entertain your Cliff Hanger out of curiosity.

Her: “I work downtown as a hairstylist”
You: “How’d u rate my hairdo?”

You: “I found out hairstylist’s dirty secret”
Her: “What?”
You: “Worried I know?”

The best restart texts invoke emotions that compel girls to respond back. Like in the examples above, they should:

Many guys make the mistake of sending restart texts that don’t provoke girls to respond back. They rely on vapid cliches like “How’s your Monday going?” or “Any fun plans tonight?” or “Happy Friday!” to stimulate lifeless conversations. Restart texts need to deliver a therapeutic shock with enough voltage to make girls re-engage in conversations that have previously flatlined their interest.

Since restart texts are designed to be emotive, they can do a lot of unnecessary damage if they’re delivered too early. A prematurely delivered restart text can make you come off as angry, desperate, needy, too eager, or even manipulative. This level of reactivity can kill off any remaining interest the girl had left for you.

You don’t have much to lose by attempting to restart ancient conversations, there’s no upper bound. But if you wait too long to restart, the girl may have already started a committed relationship, moved to a faraway location, or completely forgotten who you are. Restart texts are most effective anywhere between 7 days to 9 months of your inactive conversation’s last text.

Bob initiates the conversation with “Angie!”, the girl’s name. Bob correctly messages her the same night of the number close. You should text her a few hours following a number close in order to get your number in her phone while her memory of you is still fresh and emotional.

Bob shouldn’t have appended a “!” to her name – exclamation points always make your texts sound less powerful. Bob could’ve also done better than to write her name. He could’ve made a small reference to something they talked about so she’d remember him better. For instance, he could’ve texted something related to the dog story or just his name “Bob”.

In Bob’s next line, he starts by answering her question with his name. Bob was right to give his name out, but he should’ve acknowledged her slight faux pas for forgetting his name. He should’ve also shown reluctance to give out his name because he remembered hers and she didn’t his, which is evidence he’s lower status.  Texting “Goldfish memory? It’s Bob” would’ve done the job.

In the second half of Bob’s text, he wrote “remember I told you about my dog?”. It’s good Bob is bringing up a topic they’ve discussed before, but his execution could’ve improved. He could’ve sounded less reactive by atomizing his text to something like “remember dog story?”.

This continued for a while… 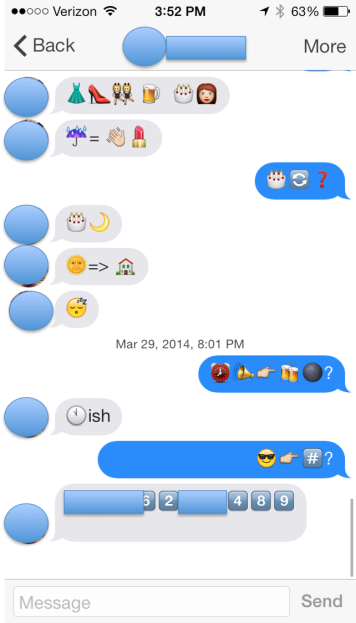 The Average Guy Opener (AGO) You Should Never Do

Example of a typical AGO from online dating sites:

Hi SoccerGuurl87, my name is Steve.

How’s your weekend going so far? I saw your profile and thought I would message you. You seem interesting and we have a lot in common. I love hiking, biking, beaches, music and movies. What are your hobbies? I’m really driven by my career and always love trying new things! I just moved to the city for a new job as a senior account manager for an internet company. I hope my message and profile catch your attention enough to hear back from you.

Girls will read your message like detectives. They’re looking for clues beyond your message’s literal interpretation so they can figure out who you really are. The #1 thing they’re detectives about is how interested you are because girls are attracted to hard-to-get men.

If you make her believe you’re very interested in her, you’ll be easy-to-get. If you show very little interest, you’ll be impossible-to-get. Your goal is to communicate the right level of interest that makes you hard-to-get.

Your message makes its first appearance in the girl’s inbox. And the first thing she’ll read is probably your emboldened username. This is your first impression, which makes it a big deal. The girl will heavily weigh any clues about your interest level that she gathers from your username.

Steve saw his username as an opportunity to explicitly pitch himself as a “chill guy” (mind you, dating sites already have a designated area for pitching oneself). Unfortunately, “Chillguysteve” is weak evidence that Steve is “chill” – a word too vague to be good evidence of any specific attractive trait anyway.

With no hint of irony, sarcasm, or humor (i.e. personality) in his username, girls will subconsciously think Steve doesn’t think the normal character he plays in life imputes attractive traits. Girls intuitively know that a hard-to-get guy wouldn’t bother explicitly pitching his value. “Chillguysteve” communicates that Steve is normally easy-to-get with his love interests.

The “Hi” is passable, but there’s no value in repeating her lame username “SoccerGuurl87”. In person, repeating her name may show you remembered it, or that you recognize her, or that you’re addressing her and not someone close by. But online, both her and your username unambiguously loom over the conversation, readily available for either of you to reference. As a general rule, putting in effort to produce low-information messages reveals your interest and mediocre social skills.

The AGO finishes off the greeting by proclaiming “my name is Steve”. At this stage in the interaction, there’s no need for the girl to know your real name. The girl will assume your high interest level caused you to disclose irrelevant information about yourself.

How’s your weekend going so far?

Steve segues from the greeting to a safe, small-talk-esque question. Other examples include:

Caring about her answer to these questions shows too much interest. Girl’s know that a hard-to-get guy wouldn’t bother learning about their plans or well-being – he’s not interested enough to care.

These questions are also cliche. They’re overused and have lost most of their meaning. Using cliches offers no clues that an interesting character is behind the keyboard. Up until this point in your message, any person or robot could’ve generated the same thing.

I saw your profile and thought I would message you. You seem interesting and we have a lot in common.

Steve designed the next line to explicitly explain why he’s messaging the girl. Hard-to-get guys know they’re communicating enough interest by the fact that they’re messaging her. Any more explanation beyond that is redundant and signals too much interest.

Explicitly explaining your intention also makes you reek of insecurity. It shows you feel you need to justify your actions or that you’re worried she won’t understand why you messaged her. You’ll lose your hard-to-get perception the moment she gets a whiff of your insecurity.

It’s actually good to express why you’re interested in a girl, but you should do it using subtext.

In the subtext version, the will infer that being from the same small town is part of why you messaged her. She doesn’t need to be spoon-fed the obvious.

She wrote in her profile that she loves to cook and finds it attractive when guys fix things with their hands. In your profile, you write that you’re a huge foodie.

Explicit — “It seems like we complement each other very well and are looking for similar things in a significant other.”

Subtexted — “I can fix cars and you can cook, I think we’re meant to be”

I love hiking, biking, beaches, music and movies. What are your hobbies? I’m really driven by my career and always love trying new things! I just moved to the city for a new job as a senior account manager for an internet company.

In the next few lines, Steve writes a self-summary that should’ve been in its designated area on his profile page. If this information is already accessible from your profile, you’re basically telling the girl you don’t think she’ll visit and read your page.

Normally, a hard-to-get guy would just assume the girl would read his profile. Or he’d be too indifferent to care whether she read it or not. That’s why shoving your self-summary in your message is a good sign you’re not a hard-to-get guy.

I hope my message and profile catch your attention enough to hear back from you.

These closing statements give girls many clues that you don’t feel you deserve your request to be fulfilled. The girl interprets the mound of cliches and redundant info above the closing statement as a try-hard attempt to justify your request. She knows you don’t derive intrinsic value from writing the BS word cloud above. She knows exactly why you wrote it and that reason is explicitly defined in the closing statement. Your revealed intentions render the rest of your message’s content as an embarrassingly effortful and indirect ploy to fulfill a single goal. This signals your insecurity and feelings of unworthiness.

The closing statement doesn’t make you easy-to-get, it makes you already-gotten. The girl doesn’t have to work at all to win you over, you’ve already pre-approved her. Girls who will fulfill the closing statement’s request will probably be at the bottom 15% of girls in your league.

Like the greeting, this is another low-information cliche that doesn’t offer any value or say anything interesting about your character. A salutation is even worse than a greeting because even some unattractive guys know it’s inappropriate in an online dating message.

Like the greeting and salutation, signatures show you’re too interested because it’s redundant and useless information. But signatures do double the damage. They’re a good sign you’re clueless about messaging girls you’re gaming. It also signals you may not be familiar with informal text communication in general. Do you even have friends?