The restart text is your text conversation’s defibrillator. It’s a provocative text designed to revive text conversations that have gone stale – your last-ditch effort at re-sparking the girl’s interest and intrigue in you. Crafting the right one will give your conversations another fighting chance.

Here are the top 5 templates for creating restart texts for your inactive text conversations:

1. The Callout. Call the girl out for not responding to your last text. A short, blunt insult will make her feel guilty for her faux pas. She’ll feel bad for being inconsistent with her kinder self-identity and will try to change your mind to resolve her inner-turmoil. Girls will also be more attracted to you for being a man who isn’t afraid to call them out. 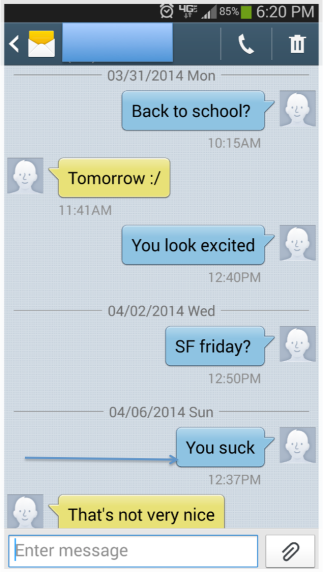 2. The All Caps Reiterator. Ask your unanswered question again, but in all caps. This text is a playful slap on the wrist for not responding. It’s an indirect way of calling her out for her bad behavior without being harsh. 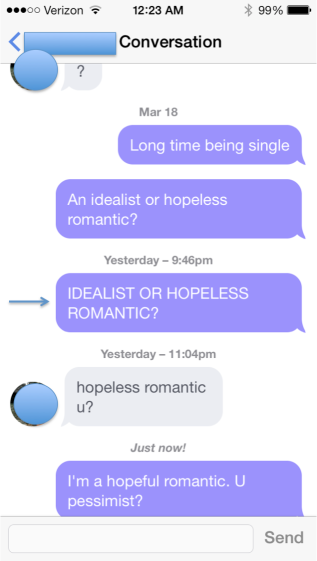 You: “Ride it in the hills all the time. What u drive?”

4. The Wrong Number. Send a text that has no relation to the girl or any of your past interactions with her. She might respond to resolve her confusion about your text. Careful not to make the Wrong Number too elaborate or girls will know it’s contrived. And obviously her name is not in your list of ‘recent’ text conversations, so to make the wrong text plausible, write a message that sounds like it’s going to a recipient you rarely text.

5. The Cliff Hanger. Pique her curiosity by alluding that you know something that would interest her. More socially calibrated girls might realize this is a ploy to get her to re-engage. But even then, they might entertain your Cliff Hanger out of curiosity.

Her: “I work downtown as a hairstylist”
You: “How’d u rate my hairdo?”

You: “I found out hairstylist’s dirty secret”
Her: “What?”
You: “Worried I know?”

The best restart texts invoke emotions that compel girls to respond back. Like in the examples above, they should:

Many guys make the mistake of sending restart texts that don’t provoke girls to respond back. They rely on vapid cliches like “How’s your Monday going?” or “Any fun plans tonight?” or “Happy Friday!” to stimulate lifeless conversations. Restart texts need to deliver a therapeutic shock with enough voltage to make girls re-engage in conversations that have previously flatlined their interest.

Since restart texts are designed to be emotive, they can do a lot of unnecessary damage if they’re delivered too early. A prematurely delivered restart text can make you come off as angry, desperate, needy, too eager, or even manipulative. This level of reactivity can kill off any remaining interest the girl had left for you.

You don’t have much to lose by attempting to restart ancient conversations, there’s no upper bound. But if you wait too long to restart, the girl may have already started a committed relationship, moved to a faraway location, or completely forgotten who you are. Restart texts are most effective anywhere between 7 days to 9 months of your inactive conversation’s last text.